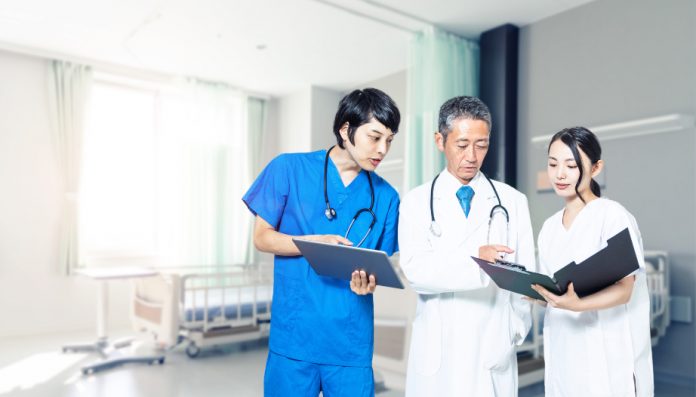 Hong Kong is described as a place where East meets West due to its Chinese roots and the culture brought by the British colonisation. It is also a major trading and services centre – in 2018 it was the seventh-largest merchandise trading entity and the world’s sixth-largest banking centre.

Over the past two decades, Hong Kong’s economy has grown by an average of 3.7% per annum while its GDP has grown by 3.1% in real terms.

As per Food and Health Bureau (FHB) estimates in 2008, the total healthcare expenditure is expected to increase an at annual average of 1.5% from 2004 through 2033 constituting 27.3% of total government spending.

Hong Kong’s healthcare system is ranked as the most efficient in the world according to the Bloomberg Healthcare efficiency index.

The system, however, is facing formidable challenges due to the growing and ageing population. This is attributed to the low birth rate of 7.3 per 1,000 population as compared to the OECD index of 12 births, and the higher life expectancy of 82 -87 years. The birth rate has been projected to decrease further by 3.2% between 2016-2066. The latest demographic projection reveals that Hong Kong’s population will increase from 7.4 million in 2018 to 8.22 million in 2043 in which the proportion of people aged 65 and above will double from 17% to 34%.

The fundamental principle of ‘no one is denied adequate medical treatment due to lack of means’ guides Hong Kong healthcare system.

The public and private healthcare providers service the Hong Kong healthcare system, the government being the primary payer through general tax revenue and provider of inpatient services while the private sector focuses on the ambulatory care or outpatient services.

The public health system is under the FHB of Hong Kong SAR and provides services such as inpatient care; healthcare protection, prevention services, community and social care services. The department of health (DH) under FHB is the government’s strategic advisor on health issues. DH operates the centre of health protection (CHP), which looks into the prevention of communicable and non-communicable diseases. It also operates specialised clinics such as elderly health, dental, drug treatment, maternal and child health services.

The private healthcare sector complements the public sector through operations of 88 registered clinics and 12 private hospitals that provide inpatient and outpatient (general and specialised) services.

Though recognised as one of the most efficient healthcare systems in the world, Hong Kong’s public health system seems to be plagued by its own challenges.

The primary challenge is the lack of doctors in the public health system. The doctors to 1,000 population ratio is around 1.9 in Hong Kong, which is lower than the OECD average of 3.4, and Singapore too, which was at 2.3 doctors in 2015. The supply of doctors has not kept pace with the changing demographics and the demands of the ageing population and an increasing population of chronic diseases.

The public hospitals provide services to 90% of the inpatients while it employs only 51% of the local doctors.

This is also aggravated by the fact that the public health system loses doctors regularly to the private sector that promises better pay, working hours and conditions. A Food and Health Bureau report projected a shortfall of 1,007 doctors by 2030 if Hong Kong maintains its current level of service.

Non-communicable diseases contributed to around 50% of the deaths in Hong Kong in 2016. Of the 44,662 registered deaths, more than half were attributed to cancer, heart diseases, stroke, chronic respiratory diseases and diabetes.

With an increasing number of patients with chronic diseases, the stress on public healthcare services is expected to increase over time.

For patients with at least one chronic condition, 81.6% of patients seek outpatient services in the public sector compared to only 59% in the private sector, while 44.7% seek care in both the sectors.

Also, the outpatient care is oriented towards episodic illness that does not support continuous care and hence lack of control of chronic diseases.

WITH AN
INCREASING
NUMBER OF
PATIENTS WITH
CHRONIC
DISEASES, THE
STRESS ON PUBLIC
HEALTHCARE IS
EXPECTED TO
INCREASE OVER
TIME

Lack of focus on primary care is evident from the fact that more than two-thirds of outpatients are treated by the private sector while just under a third were treated by the public health services in 2017. This trend along with the current funding pattern leads to fragmented care within the healthcare system as patients move between public and private health clinics for continuous care.

The rise in an aged population, chronic diseases, lack of doctors and the focus on acute care by the public health system has made it imperative for Hong Kong to look again at its healthcare system that focuses largely on integrated and continuous care, primary and social care and preventative care.

The Hong Kong government has earmarked $470bn for two ten-year hospital development plans that involve 35 projects to deliver 14,000 additional beds and other facilities to meet up the demand for service in 2036.

The immediate focus of the system, however, is to accelerate the build-up of the primary care market that provides continuous care to patients and to ensure that it is integrated across the healthcare system.

Doctors have to be encouraged and incentivised to help patients manage their chronic diseases other than just tending to patients with regular ailments such as cold, fever and so on.

To provide integrated care, it is necessary to integrate the electronic health records across the healthcare systems so that patients and doctors have access to it and are able to provide continuous care to the patients.

There have to be stronger linkages between hospitals and primary care providers that can help design personalised/ patient-centric care pathways and plans for patients.

To ensure that there are more doctors enrolled in the system, the Hospital Authority has set up a locum office to enhance flexibility and efficiency in attracting and recruiting part time doctors and nurses. Hong Kong needs to recruit specialists trained at medical schools in other countries to work in Hong Kong without having to sit for the licensing exams. Singapore, which also faces the shortage of doctors, has adopted a similar plan. It allows graduates from international medical schools to apply for conditional registration that lets them work under the supervision of a registered medical practitioner. The conditional registration can be converted into a full registration after completing a specified period of conditional registration.

The current care model is more disease-based, a fee-for-service-based conventional model that needs to change to a more preventative care model that encourages self-management and control of chronic diseases and outcome-based payment models.

The department of health drew up a comprehensive plan titled Towards 2025: Strategy and Action Plan to Prevent and Control Noncommunicable Diseases (NCD) in Hong Kong in 2018 to reduce non-communicable disease burden in Hong Kong by 2025.

The strategic action plan focuses on four non-communicable diseases and four shared behavioural risk factors that have a significant impact on population health and prevention of non-communicable diseases. One of the key elements of the action plan is to empower people and communities to gain control over decisions and actions that influence health.

While the public healthcare system drives acute care services, private services have a critical role to play in moving towards preventative health.

Private-public partnerships, especially in primary care and a bigger role of primary care professionals to help manage population health, is critical for Hong Kong to move towards health from healthcare.

Having achieved the distinction of being the most efficient healthcare system in the world, Hong Kong now has to shift its service models to make the system fit for changing population demographics. Though the healthcare spend is below some of its comparable peers, it has to devise ways of reducing the increasing burden of healthcare costs.

With its well-developed healthcare infrastructure delivering enviable healthcare benefits to the population, changes will enable Hong Kong healthcare system to be integrated, efficient and sustainable in the decades to come and hopefully retain its numero uno position in the global healthcare efficiency index.