The successful mass production of Covid-19 vaccines has, once again, demonstrated the pivotal role played by contract development and manufacturing organisations (CDMOs) in the pharmaceutical industry.

Manufacturing capability and operational competence are the foundations of their success. Yet we are convinced that, in many cases, the right ownership can add further value through improved commercial management, and the better defining and consolidation of a niche to add all the specialised capabilities to one platform.

The sector remains highly fragmented – the top five CDMOs represent just ~15% of the market – despite investors having already increased acquisition multiples to high levels, from ~10x to ~15x over the past decade. Private equity has closed some major deals already in 2021: EQT acquired Recipharm for ~€2.5bn (US$2.92bn), Partners Group acquired Pharmathen from BC Partners for €1.6bn and at the time of writing, Philip Morris International appeared to have won its battle against the Carlyle Group to acquire Vectura for ~€1.2bn.

The Pharmathen transaction is a case study of how to create a platform from a privately held company, through professionalisation and a niche-defining strategy. BC Partners’ spent €475m on the acquisition in 2015, following up that outlay with another investment of €250m into specialised R&D capabilities, making them best-in-class for sustained release technologies. They achieved substantial above-market top-line growth before their exit. EQT’s investment into family owned Fertin Pharma in 2017, sold to Philip Morris International in 2021, is another successful example of this approach.

The example of the UK’s NextPharma suggests there can be further potential for a secondary buyer. After six years under Sun Capital Partners’ ownership, the company has improved margin significantly since being acquired by CapVest in 2017. Operations have been streamlined, management has been strengthened and is has refocused activities to a commercial core and on certain niche capabilities.

There are plenty of other acquisition opportunities in this fragmented sector and there are plenty of active public companies ready to supply an exit route. Notable players include the WuXi Group, Catalent, Charles River Laboratories and Thermo Fisher Scientific, which has just acquired PPD for its clinical research division at a cost of €14.4bn. 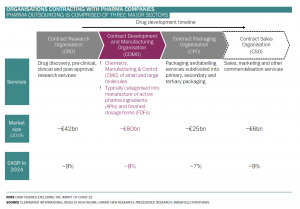 A long-established part of the pharma value chain

It is well known that Big Pharma and start-ups can rely on external providers at every stage of an innovative drug’s life cycle. Each has an acronym starting with a big ‘C’ for clinical and ending with a big ‘O’ for organisation: CRO for research, CDMO for development and manufacturing, CPO for packaging and CSO for sales and marketing.

There were always contract manufacturers of Active Pharmaceutical Ingredients (API) as part of the fine chemical sector, but before the nineties API production was primarily conducted in-house or sometimes with competitor pharma companies. But, as the boom time of high-volume patented products – the ‘blockbuster’ drugs – came to an end, and senior executives became increasingly concerned about the risk of redundant capacity if a Phase III trial ended in failure, it led to series of big plant divestments. It is from these divestments that most of the independent CMO sector was created.

Acquirers could readily operate these facilities as standalone businesses on the back of revenue from ongoing production agreements. The earlier success of CROs in the nineties had helped make outsourcing an acceptable route for company Boards to follow.

Supply security is a big worry for pharma companies. They lose precious selling time if there are manufacturing issues as there are no ‘time-outs’ or pauses on the clock as the drug patent heads towards expiry. Using external suppliers mitigates the risk of supply interruption for the pharmas as a possible contract loss acts as strong incentive for the manufacturer to fulfil orders. At the same time, specialist manufacturers can better guarantee output levels by having multiple sites for low volume products.

By the late noughties, manufacturers had realised that partners through the early phases of drug development were likely to be the subsequent suppliers. The right support in this early period helped pharma companies prioritise early-stage discovery, clinical development and then ultimately sales and marketing. CDMOs argued their involvement hastened new product development (when even a week shorter to market under patent pricing has material value). Pharma companies also didn’t have to consider the ramifications of investing in new equipment and technology, which helped reduce management time and complexity at multiple levels of decision-making.

Big Pharma divestments are still occurring today; perhaps as many as 20 per year even over the last five years. They still retain some internal production focus, however, in biologics, gene and cell therapy. Here there is still good reason to build rather than buy capacity, as reliability and retention of trade secrets argues for keeping operations behind closed doors. 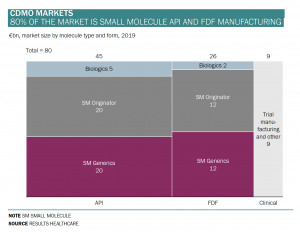 Strong growth above and beyond drug sales growth

Covid-19 has been significantly positive for drug production, with non-specialist CDMO providers ultimately also drawn into manufacturing. Publicly listed CDMOs have reported revenue increases and no major operational disruption. A standard estimate would have earlier put the 2019 global market at €80bn with projected growth pitched at around 8% through 2024. The well-known drivers for market expansion are an aging population, endemic chronic lifestyle diseases and the development of new biologics. The CDMO sector itself grows with each additional divestment.

The market can be segmented by type of molecule, level of innovation and whether the drug is at the final formulation stage.

The drug chemical itself, the API, must be included in a pill or liquid with other materials to comprise a Finished Dosage Form (FDF). ‘Small molecule’ originators (‘innovative’ pharma companies with patents) and generics represent around 80% of the market value and API revenue is slightly more than FDF. ‘Small’ molecules constitute no more than a few dozen carbon atoms and can, therefore, be made by chemists without recourse to biology.

The ~10% of revenue share from high-margin biologics is growing the fastest, both from new approvals and ‘biosimilars’, which are the equivalent of generics. This segment is the most difficult to supply, as the complexity of production makes it impossible to achieve a perfect copy, so the original production facilities may be needed to maintain the integrity of the brand, since every detail of the production process cannot be explicitly defined.

Even without that, regulatory compliance and quality is harder to achieve, so pharma companies are less keen on potential cost savings.

Some CDMOs attempt to be a one-stop-shop, offering services from drug development to FDF and packaging but others focus on a specific technology or pharmaceutical formulation. As you might expect, more smaller providers are specialised and likely privately held. It is in these providers where new owners have an opportunity to professionalise and increase capabilities.

Moving towards a one-stop-shop is a long-running trend, achieved by larger CDMOs through M&A.

Capability expansion allows for an integrated sale relationship and cross-selling across the drug life cycle. Customers should also benefit from convenience, time and cost savings; especially with complex manufacturing requirements that may make tech transfer lengthy and expensive.

Although there are plenty who make this case, a former CEO of Corden Pharma, Dr Rautsola, told us that providing high quality services from API to FDF requires completely different skillsets and clients do not necessarily want to be locked in with one provider. 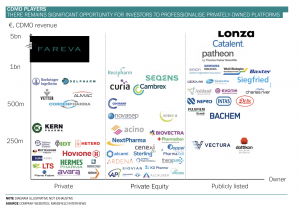 Opening the kimono to Big Pharma

Having said that, the desire for a one-stop-shop across services may not be entirely wishful thinking. Pharma clients are on record as saying they want deeper, more ‘strategic’ relationships with CDMOs. The revenue model may then be less based on material sales volume but may include payments for capacity and other guarantees. A household name Big Pharma brand may have hundreds of contracts with CDMOs, so it should be more efficient to manage five to ten long-term trusted relationships rather than cope with a series of smaller relationships with a greater number of partners. Dealing with fewer relationships would also make it feasible to jointly consider expansion opportunities and co-investment in new physical plants.

However, such trust normally implies high financial transparency, which may constrain margins in return for volume. EBITDA margins typically range from 15% to 20%, with highly specialised, well-managed CDMOs managing to achieve something slightly higher. CDMO performance and an ‘economic profit’ above the cost of capital should be easier to maintain than in sectors such as automobiles, where a supplier may become dependent on the only regional car maker and its designs. Location in a geographic cluster may be helpful to a CDMO but does not limit its potential customers in the same way.

The market characteristics outlined should reveal the potential for growth in the sector, but investors need to consider increasing regulatory scrutiny, cost competition and operational complexity before making the plunge. Any CDMO investment target must be judged carefully against their clients’ operational needs. Clients also have many potential suppliers, so they have bargaining power and can push to reduce cost. Even when competitive, cost is quickly not enough. Clients can switch, or go elsewhere for new projects, if there is any perceived lack of reliability, redundancy or problems for any other, more subjective service elements.

Chinese and Indian manufacturers are especially competitive in generic API production, but new product development remains predominantly in US and Europe. We don’t see this changing as service quality, logistics, regulations and intellectual property (IP) rights make Asian providers less attractive for innovative pharma. CDMOs also need to be able to navigate the different regulatory demands placed upon it. A smaller client’s nightmare is inspection violations at their CDMO, which can result in shutdown. Otherwise, clients look at geographic proximity, the company’s global presence and its cultural fit. There are all key components that can truly differentiate a CDMO.

The original strategy of divestment by Big Pharma appears to have been vindicated, certainly for small molecules. Despite being less well known than their Pharma clients, CDMOs will be well aware of the old adage that in a gold rush, the millionaires will be those selling the buckets and shovels. The barriers to supply may be lower than transporting your goods to Johannesburg or the Klondike and profits less crazy, but the quality of earnings are far higher. This is now a well-established sector benefiting from growth in volume and shift in mix towards the technical complexity of modern pharmaceuticals, but one protected from abrupt price drops and reimbursement uncertainty.

We believe this is a comfortable sector for many owners, but if you don’t want to get too comfortable and you are ambitious for higher earnings, there’s opportunity to invest in technology, scale and scope of offerings through M&A and smaller bolt-ons. Big Pharma’s stated desire for ‘long-term strategic partnerships’ must favour larger providers that can promise trustworthy effectiveness within a long running relationship ticking all the boxes. Several private equity investors have managed to add and capture value and we expect plenty more to try something similar as we move deeper into what we all hope will be another Roaring Twenties.

InFocus: Mansfield Advisors looks at the prospects for fertility around the world

How special will specialist care be?

Public-private partnerships and the fight against Covid-19