In Asia-Pacific it was the large-scale and tech-savvy assets that received the lion’s share of investment. Deal volume and deal value both rose in 2021 over the steep increases the prior year. The number of transactions in 2021 increased to 179 from 156 in 2020, and disclosed value rose slightly to US$17.8bn, from US$16.9bn, as the region continued its multiyear growth trajectory (see Figure One).

Asia-Pacific markets are seeing increased consumerism and a willingness to spend on healthcare, which has fuelled activity, especially with those investments building a more robust consumer-centric digital health environment. Additionally, government regulations that support growth, combined with the maturation of many assets, continue to foster an environment for a reasonably strong year for private equity in India, China, and Southeast Asia. 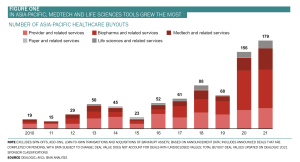 Healthcare is rapidly becoming more consumer-centric, with people more willing to spend out-of-pocket, as well as demand a better customer experience and better whole health outcomes. For example, more patients in Asia-Pacific are using private health systems because they value the experience and level of comfort. Governments in the region are spurring this behaviour through regulations generally supporting private healthcare.

As the environment for healthcare assets improves, private equity has flowed in. Local deal volume increased in 2021, while cross-border deals plunged to 22 from 42 the year earlier. The region also attracted more sources of capital, including growth-equity and infrastructure funds. The latter have widened their net to capture healthcare assets, and funds such as EQT Infrastructure and Infratril made large plays for Icon Group and Pacific Radiology Group, respectively. Infrastructure funds have more access to capital, and they’re now seeking to take advantage of the attractive returns and inelastic demand in healthcare to diversify their portfolios. Growth equity, meanwhile, has gained popularity as maturing assets require more capital to scale up, and as the region hungers for more sophisticated IT.

Advanced healthcare delivery models, including e-pharmacies and direct-to-consumer vendors, continue to attract investment, particularly as Covid-19 has accelerated the adoption of at-homecare — digital-first and tech-enabled care were big in India. This activity was primarily driven by growth-equity investments such as API Holdings, an integrated digital healthcare platform, which raised US$323m from Prosus Ventures. API Holdings is also the parent of TPG-backed PharmEasy, an Indian online pharmacy and medical store, which filed for an initial public offering in 2021.

Activity increased throughout Asia-Pacific, including Singapore’s Homage, which focuses on homecare for chronic illnesses and received US$30m in Series C funding led by Temasek, and Australia’s Mable, an at-home aged care and disability support services company, which received a US$100m investment from General Atlantic.

Brick and mortar can still thrive, and primary care hospitals are focused on reducing costs and streamlining operations. General hospitals remain important throughout the region, through such acquisitions as Malaysian hospital management group Aurelius Healthcare, in which Navis took a majority stake, and New Frontier Health Corporation, including the Chinese hospital group United Family Healthcare, which was taken private by a consortium of investors.

Providers have encountered stiff cost pressures throughout the pandemic and are trying to rein in expenses through outsourcing specialist services such as pathology and radiology. In turn, that spurs consolidation and further investment in these service providers. For example, Infratil bought a stake in Pacific Radiology Group, the largest private diagnostic imaging service provider in New Zealand, on the heels of its diagnostics acquisition of QScan in 2020. Some companies also integrated offline and online operations, such as sponsor backed PharmEasy buying 66% of Thyrocare, one of the largest pathology lab chains in India.

Biopharma transactions spiked in the region during 2020 to 81 deals, declining only slightly to 78 in 2021 despite greater competition from the capital markets. Similarly, disclosed deal value decreased in 2021 to US$8.7bn from US$8.9bn, but overall, Asia-Pacific has more-or-less maintained the record levels of activity seen in 2020.

Biopharma investors in the region focused mainly on services in the drug development and commercialization process, especially on the earlier-stage development sector that benefits from government support and the influx of new capital. This logic informed GIC’s and Sequoia Capital’s acquisition of a more than 10% stake in Novotech Health Holdings, an Australian-based contract research organization, from TPG Capital.

Novotech proved the investment thesis for pharma services, and there were several deals conducted on the heels of TPG’s successful exit, including Riverside’s investment in Avance Clinical, Blackstone acquiring Nucleus Network from Crescent Capital, and Cobepa-backed BioAgilytix acquiring 360biolabs.

India hosted activity in pharma commercialization and manufacturing. One such deal was True North’s purchase of a minority stake in Anthem Biosciences, an integrated drug discovery, development, and manufacturing services provider. Another example came from Advent International buying a controlling stake in ZCL Chemicals, which manufactures active pharmaceutical ingredients and advanced intermediates.

Life sciences buyouts in the region surged to 16 in 2021 from 11 in 2020, most involving diagnostic equipment and services. Key investments include Catterton’s US$181m investment in Japan’s PHC Holdings, which manufactures equipment for medical diagnostics, and the US$150m funding led by ABC International for WuXi Diagnostics, a Chinese enabling platform for early diagnostic and clinical insights.

Government funding and incentives for home company innovation continued to spur medtech activity in Asia-Pacific, particularly China. Deal volume exploded in 2020 to 26 deals from ten the prior year, and rose substantially again in 2021 to 43 deals, 34 involving Chinese assets. Many of these local manufacturers compete in high-tech fields such as heart valves and cardiac implants. For instance, NewMed Medical, a Shanghai-based artificial heart valve system supplier, raised over US$100m in its Series C round led by Temasek, and medical devices developer Hangzhou Valgen Medtech has raised hundreds of millions of dollars in a Series B round led by DCP and Sequoia Capital China.

PE firms logged only seven healthcare IT deals in 2021, slightly above the five registered in the previous year. Many of these investments and acquisitions fuelled an ongoing digital transformation, particularly in India and Southeast Asia. Growth equity participated, mostly in the provider sector, but activity also included biopharma deals such as the US$255m Series C investment in the Hong Kong company Insilico Medicine, led by Warburg Pincus.

Investors in Asia-Pacific will likely keep their eyes trained on the biopharma and medtech sectors.

A few themes with legs include the continued adoption of digital-first and other advanced provider models, drug development and commercialisation services, and more mature assets coming to market with government assistance. 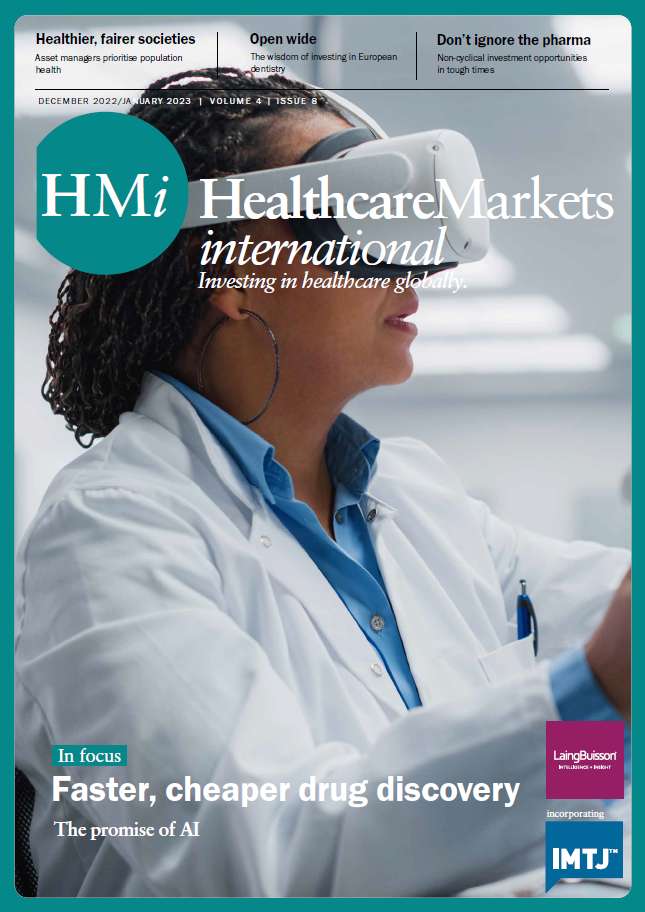 Public-private partnerships and the fight against Covid-19