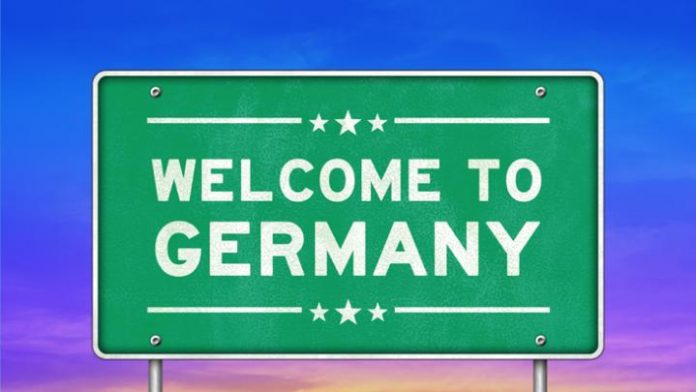 International chains are buying into Germany. Should others be doing the same? Max Taylor and Adam Scott of Mansfield Advisors uncover some background to the recent activity

It is a sobering time to be thinking about the mundane nature of investment and commercial opportunities in a sector designed to support and protect those most vulnerable from age. Hearteningly, it appears that Germany managed to protect its care homes better than some other countries. Only 0.4% of residents passed away owing to Covid in Germany, compared to the 5.3% in the UK.(1) German states spent heavily to support care homes and temporarily lowered care ratios and other standards to enable providers to cope.

Partly in recognition of the onerous working conditions, from 2022 the minimum wage for those working in the care sector will be €15.40 per hour, some €2.20 higher than for other workers.

Germany has a high share of private provision in aged care sector (see Figure One), though most providers are small. And demand for this type of care is projected to increase when we look at the demographics. In the ten years to 2030, the CAGR in the number of 87-year-olds and above, the prime age for requiring a care home, is a significant 4.7%. This cohort is seen as needing a place in a care home, since substitution home provision is unlikely to be appropriate.

Yet, as is so often the case, the challenge is making care pay. Operators are faced with relatively low prices from public payers, while cost pressures ‒ especially in staffing ­– continue to grow. To help address the issue, the social care tax has risen from 1.95% in 2008 to 3.05% in 2021, so there is a clear mechanism for payment.

Nevertheless, despite the evident challenges faced by investors in elderly care homes, and the bad press private equity attracts from local politicians, there are plenty of players that seem to think German care represents a risk worth taking. 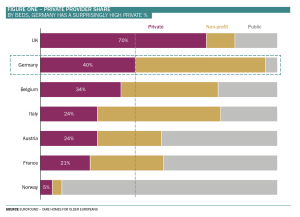 The largest corporate, Korian, has acquired recently, but only with a smaller acquisition in an adjacent market IPDL (Intensivpflegedienst Lebenswert). Alloheim has also acquired the Pro Talis Gruppe, which includes care homes and apartments with a capacity for 1,100 residents. Alloheim itself, the second largest corporate with 124 sites, is thought close to being offered for sale, despite being acquired as recently as 2018 by Nordic Capital. As Nordic normally aim for double digit returns for its funds, this will make for an interesting transaction to watch.

The Belgian REIT Aedifica has also been acquiring at a smaller scale, along with BAE Systems Pension Fund, which has Elevation Advisors as its asset manager partner.

The German way of care

After reunification in the 1990s, the redesigned social care system was to be founded on the principle of social solidarity on a countrywide level. A fixed percentage tax paid by all workers goes into the long-term care insurance fund (LTCI). This fund helps pay for over 3.4 million people with long-term care needs, some of whom are in the 10,000-plus care homes.

To qualify for care, individuals are independently assessed against six ‘domains’:

Individuals are assigned a care level from 1‒5, which determines the amount of support they can expect to receive, where they might receive it, and how much the LTCI will contribute – ranging from 5% to 55% of the price. Three quarters of care recipients remain at home, and only 30% of this group receive formal care.

Each of the sixteen states have different levels of home versus care home provision.

Co-payment is required by the family or their municipality

The LTCI determines a cost of living, including care, for each of the five levels, for the area within each state. For an area with average costs for a Level 3 need, they might allow €1,700 for monthly care costs, €500 for accommodation and €700 for other living expenses. The LTCI would then pay 45% of that total nominal cost and therefore contribute €1,300 to the care provider. The remainder of any costs must be negotiated and paid by the family. If the family is unable to pay the difference of €900 a month, then there is no choice of home, and the municipality pays the remainder.

Most providers operate on a non-profit basis and supply approximately 60% of the market by value. These providers are large independent organisations, and include the likes of Diakonisches Werk and Caritas, which draw on their Protestant and Catholic backgrounds, respectively. Only 5‒10% of the market is supplied by municipalities and, to a lesser extent, the states themselves.

Many businesses remain small, however, and family owned. While the few private chains in existence are far more likely to operate across multiple states and different regions of Germany. The largest private provider is France-based Korian, which has 254 facilities across Germany, significantly more than the next largest, Alloheim. Orpea Group, with 191 homes, has continued growth through acquisitions, while Pro Seniore has remained steadier with 77 facilities. 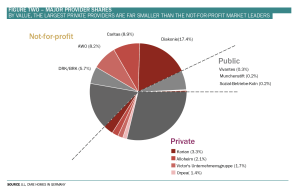 Prices are regulated at the national level, as are profits under the Pflegestarkungsgesetz II. This has constrained expansion by corporate providers. Otherwise, the Federal Reform Act of 2006 returned the regulation of care homes to the sixteen states. There is a notable variation between the states when it comes to standards and requirements for equipment, accessibility and building regulations. Older homes are ‘grandfathered’ and do not have to comply with more recent regulations on single rooms, so these differences are most applicable to newbuilds.

The big independent chains have substantial market share in some states and are therefore large enough to be preferred providers. The notable presence of REITs in the more affluent states means there are plenty of propco/opco agreements in care homes that leave the independent chains only needing to cover operating costs day-to-day.

There is a clear preponderance of older people in Eastern Germany, thanks to many younger people moving westward following re-unification in 1990. Some states limit the number of residents per home, such as 80 in Baden-Württemberg and 100 in Berlin. 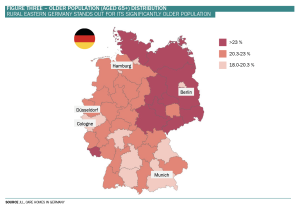 Where is the love?

Given the challenges faced in the care home sector, the question is: how to get it right in Germany? To answer that question, we consider two corporates which appear to have succeeded: the market leaders Korian and Alloheim.

French stock-exchange listed, Korian, has been able to establish itself as the largest player in the German market by virtue of it being the second-largest player across all of Europe ‒ founded in France with subsidiaries in Spain, Portugal, Belgium, Netherlands, Poland, Austria, Italy and more. Its investment in Germany has produced steady returns, with the latest figures released from Q3 2021 showing a YTD2021 revenue of nearly €800m, and an annual increase of around €40m. But the success story in Germany comes from buying smaller, regional chains to build a cross-regional platform. After acquiring, it has also increased the capacity of existing facilities, upgrading homes to include assisted-living apartments under the same roof (but with a different entrance). This has allowed Korian to offer a more favourable care mix to the elderly German population.

Alloheim has also been able to create a significant presence in the right geographies, the prosperous German cities ‒ including Hamburg, Dusseldorf and Cologne ‒ but has limited its exposure to any one individual state. It has targeted a more affluent population in residential areas where there is a greater demand per care home bed. It is building new facilities.

Carlyle paid Star Capital €180m for Alloheim in 2013, with its price thought to have skyrocketed up to an estimated €1bn-plus in the sale to Nordic in 2017, making it the largest buyout in the German care sector to date.

There is undoubtedly a lot of potential in the German care home market, and there are plenty of potential investors taking a look at this space. But the sector must be approached with caution.

Ultimately, the German care market can be navigated with local on-the-ground knowledge of each state and by tailoring the approach accordingly.

Neither Alloheim nor Korian would have been able to break the mould and establish a nationwide presence without this type of expertise helping to fuel their growth.

The outlook is positive. The German care home market is ready for a slew of acquisitions, newbuilds, and new foreign investors, which will result in fresh and exciting investment opportunities in this complex care landscape. 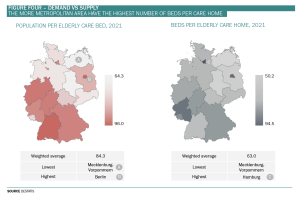 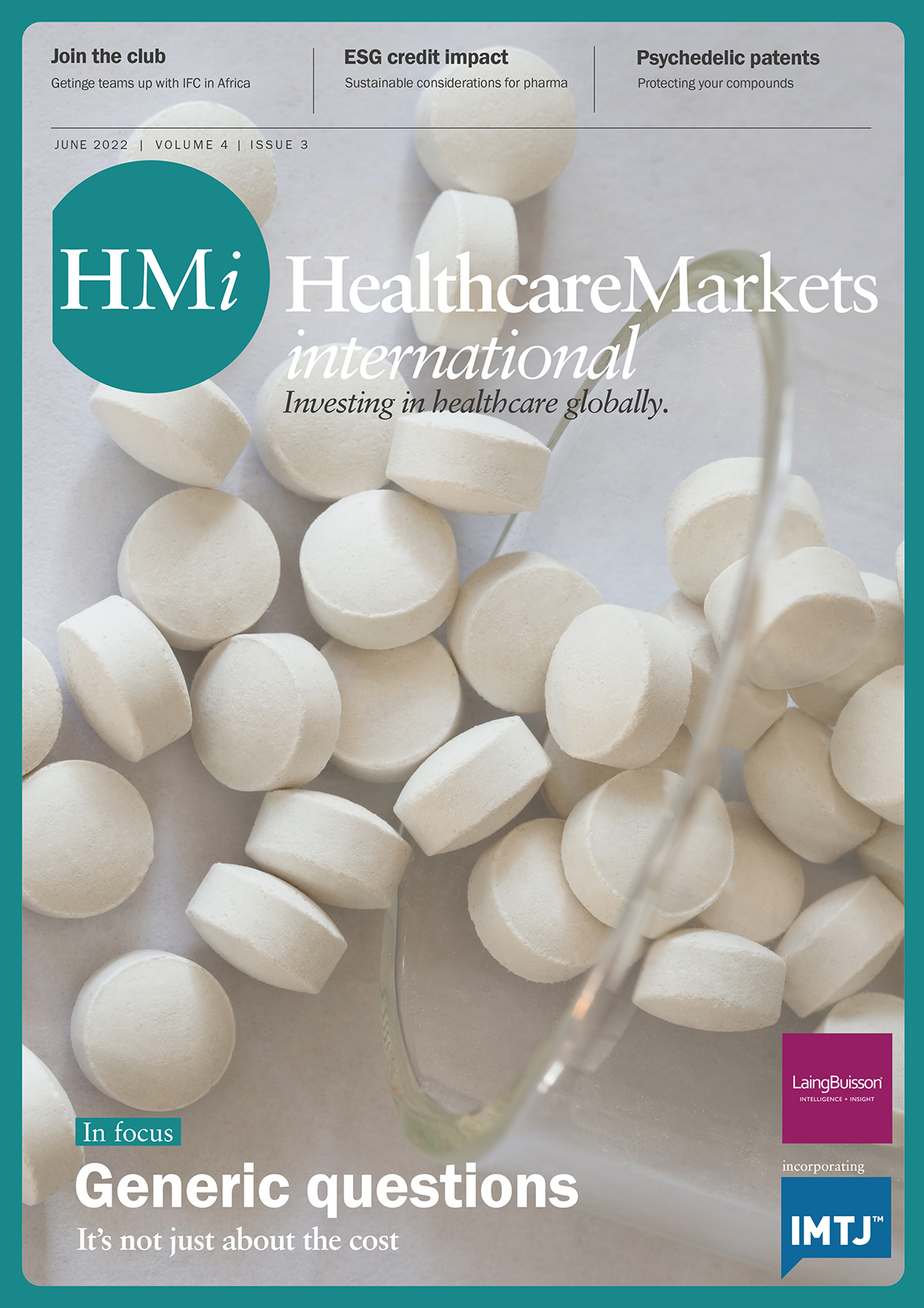