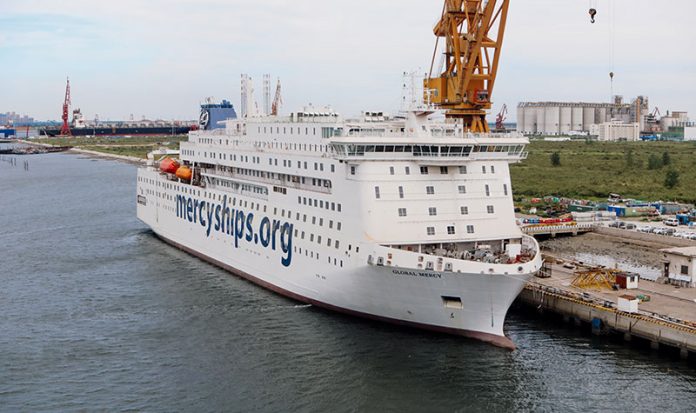 The Global Mercy – the world’s largest civilian hospital ship – has been a special project for Sweden’s Stena RoRo, and after several years of design and construction, the ship is ready and leave the Tianjin Xingang shipyard in northern China.

Mercy Ships, the international charity that ordered the vessel, expects it to enter service by the end of 2021, after transport to Africa.

“We have applied one of our concepts on a ship from the RoPax-class, which are passenger and freighter vessels for international voyages, and modified her into a pure passenger ship with hospital capabilities,” said Per Westling, chief executive of Stena RoRo.

“Instead of a car deck, we’ve built operating rooms and hospital wards. The ship will have space for about 950 persons with everything needed for both patients and those who work on board, including grade schools and nursery schools for the children of staff,” he added.

Over the vessel’s 50 year expected lifespan, it is estimated that more than 150,000 lives will be changed onboard through surgery alone.

In addition to providing surgeries, the Global Mercy will be outfitted with training spaces including a simulation lab with virtual and augmented reality, mannequins and other training tools and simulated post-op care space, which allow trainers to simulate local conditions and limitations in order to teach best practices in low-resource environments.

The 174-meter, 37,000-ton ship will have six operating rooms and house over 600 volunteers from around the globe representing many disciplines including surgeons, maritime crew, cooks, teachers, electricians, the host staff and more. The ship will also feature a 682-seat auditorium, student academy, gymnasium, pool, café, shop and library – all of which have been designed to accommodate up to 950 crew onboard when docked in port.

Mercy Ships has provided medical care on ships for more than 40 years. With cooperative agreements by the governments of the beneficiary countries, Mercy Ships hospital ships are in a port in each country for about ten months. Since 2007, the Africa Mercy, a converted train ferry, has made it possible to deliver free medical and dental care. The Global Mercy will more than double the capacity of Mercy Ships to deliver aid.