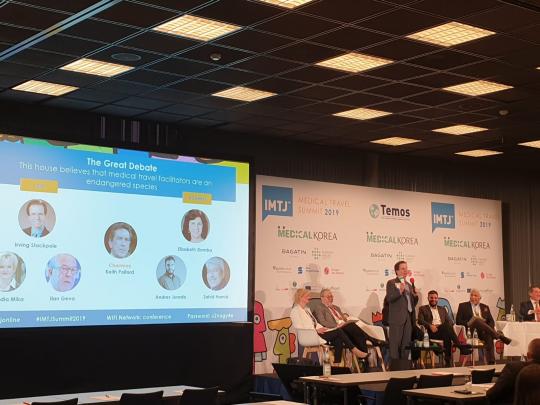 Now in its fifth year, the 2019 IMTJ Medical Travel Summit brought together international industry leaders in Berlin to debate whether to support or disagree with the proposed motion that

Chaired by IMTJ Editor in Chief, Keith Pollard, the Oxford Union-style debate pitted two teams of proposers and opposers and generated a lively debate. A fully unscientific vote from the audience, with absolutely no bribes offered, produced a narrowly won conclusion: the house believes that medical travel facilitators are NOT an endangered species

This year’s well attended two-day IMTJ Medical Travel Summit in Berlin attracted attendees from a diverse range of countries including Tunisia, Taiwan, Lebanon, Malaysia, the UAE, Spain, South Korea, Croatia, Mexico, Germany, Ireland, the UK and Switzerland. Thank you to our Sponsors and Partners for supporting the Summit.

Sorting out fact from fiction

Is cost of care the only factor?