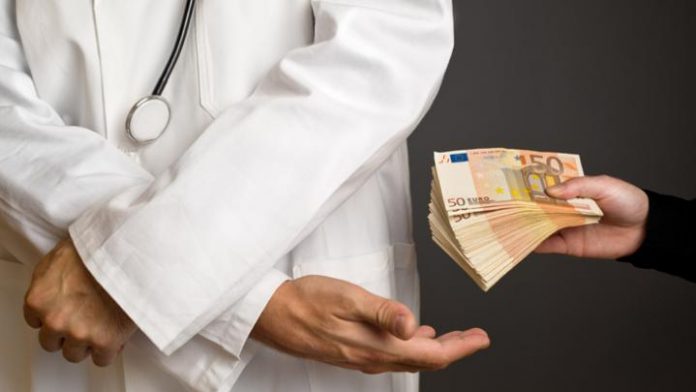 880 doctors in Kenya are under investigation for allegedly misadvising patients to seek treatment abroad in exchange for kickbacks.

880 doctors in public and private hospitals in Kenya could lose their practising licences and face criminal charges if investigations confirm that they intentionally misadvised patients to seek treatment abroad in exchange for kickbacks.

The Ministry of Health received reports on the unethical practice last year and launched investigations whose outcome will be released soon.

Health Principal Secretary Nicholas Muraguri says that the investigation seeks to identify rogue doctors who have been colluding with specialists in countries such as India to fleece patients of millions of shillings while draining Kenya’s hard currency reserves. Muraguri explains, ” Any doctor found guilty of the alleged malpractices will be stripped of their practising licences and face the risk of criminal prosecution. It is really messy. If a doctor of whatever calibre is reported to the medical services board, they will not only be named and shamed but be deregistered for that is a criminal offence.”

Kenyan doctors are alleged to have established a network of illicit dealings with foreign hospitals that ensure a regular flow of patients to the facilities even for ailments that can be treated locally in order to pocket the kickbacks.

The Indian hospitals have not been named but it has become a regular practice in some Indian hospitals to pay referral fees to overseas doctors, with no understanding of the bribery laws or professional rules that this could be breaking in those source countries.

We look at the future of medical tourism in 2012