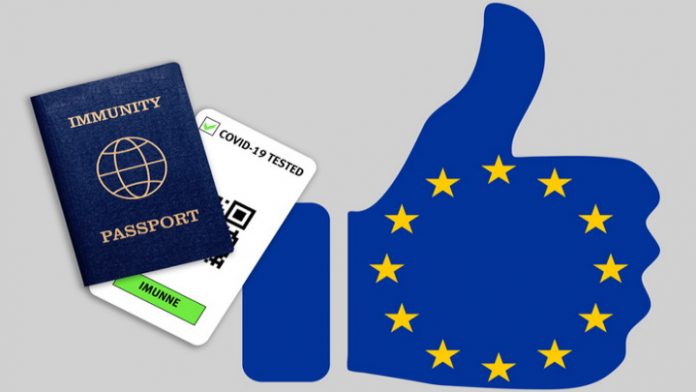 Momentum is building behind vaccine passports, and EU leaders have agreed to introduce some form of immunity certification by this summer. Some countries want an EU-wide certificate; others want national ones which are accepted across the EU. Ian Youngman looks at the varying approaches in EU countries on vaccine passport systems.

Technical work on a digital platform to authenticate travellers’ health status could take three to four months, according to an EU briefing note. There are also legal hurdles, the challenge of agreeing the scope, and resolving medical questions.

The EU is working on technical aspects of the certificate with the International Civil Aviation Organisation and the World Health Organization (WHO). The WHO wants countries to stop issuing their own passports until a global or at least EU-wide deal can be worked out.

Greece, with tourism accounting for 25% of GDP, is hoping for some sort of travel pass arrangement to be in place in time for the country to benefit from summer tourism. Greece is so committed that it is prepared to do deals separately from the EU.

Austria is also threatening to implement its own vaccine certificate system should the EU not have one in place within weeks. The country is reportedly open to allowing travel for those who have COVID-19 immunity due to already contracting the virus, and for those who have been recently tested.

Other EU countries that support the use of a vaccine passport include Czech Republic, Poland and Slovakia.

Germany and France are the most vocal critics of the vaccine passport. Germany has doubted their effectiveness, raising the point that first it must be clear whether or not vaccinated people were no longer infectious, and as long as the number of those who have been vaccinated is still so much smaller than the number who are waiting for vaccination, the state should not treat the two groups differently.

Belgium has also stated concerns about ostracising significant proportions of the population, saying that allowing only the immunised to travel would be discriminatory. Romania expressed concerns that vaccine certificates would split Europeans into a two-tiered system of those who have had the vaccine, and those who haven’t.

Spain and Bulgaria want an EU-wide certificate, but Austria has said it will implement its own if the EU cannot agree on anything by spring. The country wants to include people who have immunity through having COVID-19 and those who have tested negative. It has proposed the introduction of a “green pass” for those who would not pose a threat in spreading the coronavirus, in an attempt to roll back the travel restrictions currently in place across Europe. Three categories of people would be granted such a pass, including those who already received the vaccine, people who were already infected, and those who have been tested very recently.

Romania wants a coordinated and unitary approach at the European level. It argues that the vaccination certificate should be used for medical purposes, and the process of identifying the technical elements contained in a European travel certificate will have to continue.

With more COVID-19 vaccines getting approved, and more people being vaccinated throughout the EU Member States and the Schengen Area Associate countries, the urge to restore travel for those vaccinated has also increased.

Realising that a system of national passports that are all different and with countries introducing their own entry rules, European leaders have agreed to work on a standardised and interoperable form of proof of vaccination for medical purposes. Leaders will determine at a later stage in what circumstances these certificates could be used.

A proposal for an EU-wide vaccination certificate/digital pass allowing free travel, is due to be presented this month by the European Commission.

London is capital of Europe for Arab cosmetic procedures